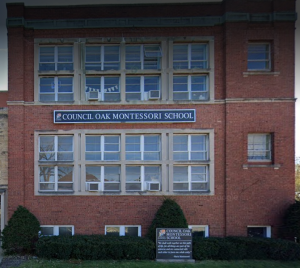 Council Oak Montessori School was organized initially as an elementary school by a group of parents in response to the need for elementary level Montessori education on the far south side of Chicago and neighboring suburbs.

The founding parents — Kenneth and Karen Brienzo, Patrick and Doris Cox, and John and Marsha Enright — knew that there were many others in the community who, like them, wanted their children to continue to learn and grow in a Montessori environment after the pre-school years.  So plans were begun.  The prospect of opening a school in the Fall of 1990 became a reality when rental space was found at the Morgan Park United Methodist Church and Diana Smith Butler accepted the position of the first Montessori directress (the Montessori word for “teacher”) and Educational Director. In the summer of 2003, the Children’s House program (ages 3-6) came into being, a logical extension of the great work of the elementary school.  This very popular level serves parents looking for a superior program for their young children. All the founding families are active in the school today. Over the years, they have been fortunate to find many remarkable individuals to work with them at Council Oak, such as Liz Corr.

The Name of this School

The name “Council Oak” was inspired by a grand oak tree that once stood just a few blocks from the site of the school.  In 1963 the tree was estimated to be between 650 and 750 years old, making it the oldest tree in Illinois.  In April of 1988, a severe wind storm brought the giant oak down and raised the consciousness of the historical significance of the tree. The tree was called “Council Oak” because it was the site that Native Americans from various tribes reportedly used to hold councils.

According to Robert Lane of the Ridge Historical Society, it was logical to assume that Native Americans from Illinois, Indiana, and Wisconsin used the tree as a resting spot, as “it was on sort of an island where Native Americans going down the Vincennes trail could find shade and water.”  (Quote from Beverly Review, April 13, 1988.)  As we think of this old tree and the historical events to which it has been connected—from the passing of those Native American councils to the early settlers, to the growth of a city—we are linked to the forests, animals, and people of this area from the past 700 years. The tree serves as a symbol of the world the child is entering; of the linkage we have to the earth and to those who have gone before us, and of the necessity to be well-prepared to contribute to the future.

The Naming of Council Oak Montessori

by poet John Enright (written for the children of Council Oak, February, 2000)

Once there were some parents who were going to start a school They said, what will we call it?

We must pick a name that’s cool.
They thought of lots of names but mostly they were pretty rotten
I’d tell you what they were, except, they all have been forgotten.
And then one father said: hey what about that old oak tree
That grew near here, that grew so tall?  You know, it seems to me
That tree was something special.

The Potawatomie, The native tribe that roamed this land before the settlers came,
Had special meetings by that tree and called it by a name.
I don’t know what they called it in the language that they spoke,
But when they spoke in English, they called it “Council Oak.”
A council was a meeting where they gathered to discuss Big things.
They sat in circles, a little bit like us.
They sat beneath the tall oak tree, in a peaceful spirit.
This school is named after that tree.
Remember when you hear it!
And don’t forget to tell your friends, now you know the story,
Of how this school got the name “Council Oak Montessori.”